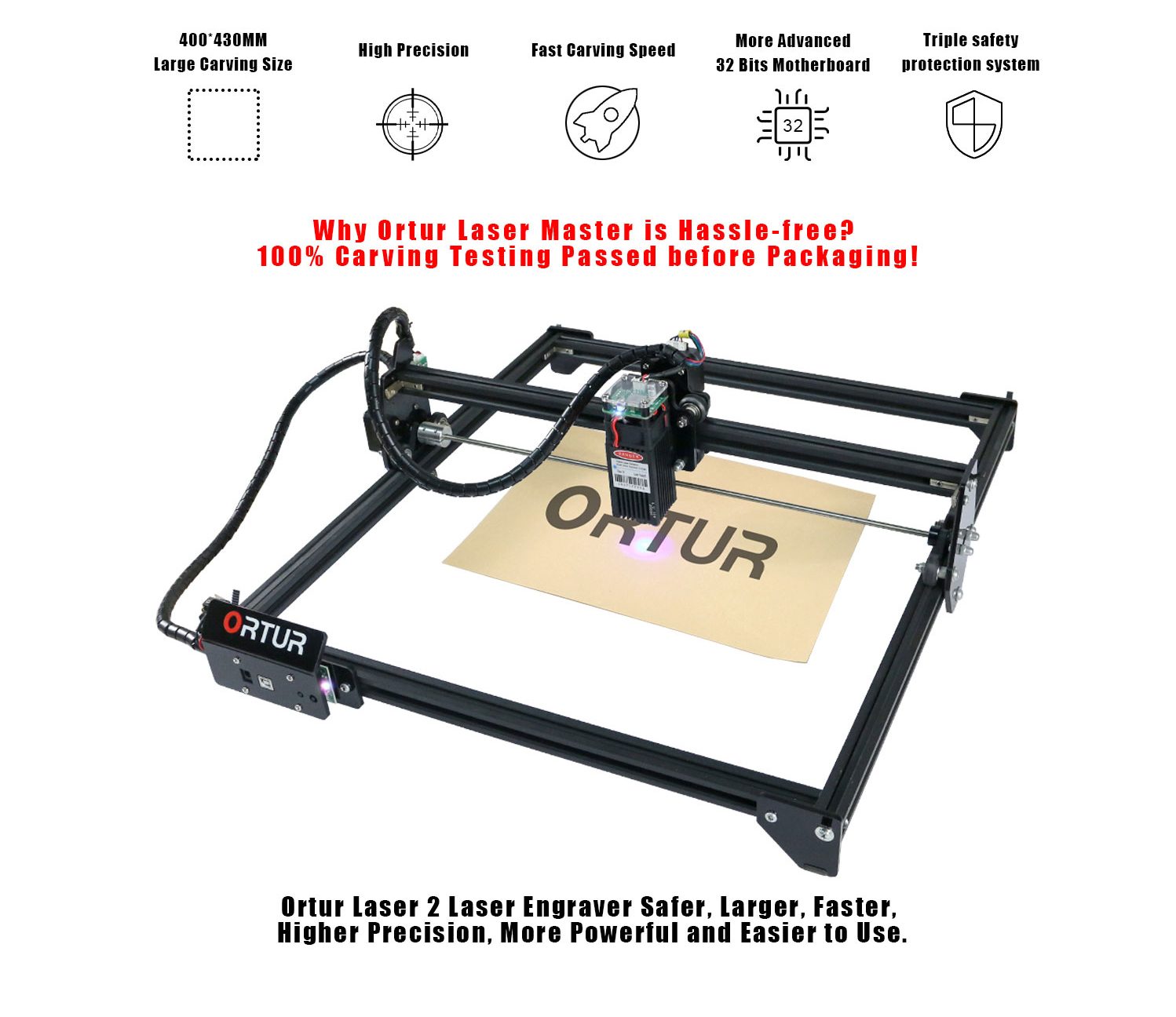 Main Features:
●Specialized Motherboard with STM32 MCU
It could preprocess 32 instructions, support baud rate as high as 921600, more powerful!
●The Most Advanced 32Bits Laser Engraver Firmware
Ortur laser master firmware, smarter, faster, higher precision and easier to use.
● Laser power range could be S0 – S1000, compared to 8bits desktop laser engravers, which only has S0 – S255, Ortur Laser Master could control laser beam more accurately, could even use the high power laser unit to “draw” a picture on paper , that the 8bits high power laser engravers could not do.
● Engraving speed could be as high as 3000MM/Min. ( If do not consider the laser carving result, the velocity of movement could be as high as 1000MM/S )
●Active Position Protection
There is a G-sensor on the motherboard, if the machine detects unauthorized movement, the laser beam will stop.
●Laser Beam Safety Guard
If your computer system halted or USB cable disconnected, led to that the laser engraver stops moving, the laser beam will stop, to prevent fire.
●Exposure Duration Detection and Limitation
If laser engraver is under control, but users forget to operate and keep the laser beam working, extra safety will cut off in case the motor stopped moving, to prevent fire.
● LaserGRBL ( free software ) supports Windows XP, 7, 8, 10. LaserGRBL is the most popular carving software in the world, could import different format images, you could editing in PhotoShop, Inkscape, CAD, etc. and then connect to the engraver via laser LaserGRBL for engraving and cutting.
● LightBurn ( paid software, lightburnsoftware.com ) supports Windows, Mac OS, and Linux. It’s the most popular paid carving software in the world, very easy to use.
● This laser engraver supports PWM mode.
● Pre-assembled parts, just need 10 – 20 minutes to install the machine.
● 400 x 430 mm large engraving area.
● Aluminum profile frame + structured cabling, solid structure, smooth operation, attractive appearance
● Synchronizing shaft mechanical structure, avoid out-sync on two Y rails, during full speed engraving.

NOTE: Although not always necessary its important that the drivers for the STMicroelectronics controller are installed correctly in your system for propper operation (only required in Microsoft Windows systems)

When connecting your Ortur Laser Master 2 to your computer, navigate to your device manager using this steps:

If you already see STMicroelectronics Virtual Com Port device in the ports section, you do not require the driver instalation, Otherwise, please use the drivers below matching your Windows operating system and install them. After instalation, restart your computer and check again if your machine is recognised as a STMicroelectronics Virtual Com port. Also take note of the (COMx) port atributed to your Ortur.

At times bad things happen! Be it shipping damage or failure during use, below a list of STL files that should give you the ability to 3D print spare parts for your Ortur Laser Master 2:

For support inquiries please use Ortur’s Ticketing system at

This website uses cookies to improve your experience while you navigate through the website. Out of these cookies, the cookies that are categorized as necessary are stored on your browser as they are essential for the working of basic functionalities of the website. We also use third-party cookies that help us analyze and understand how you use this website. These cookies will be stored in your browser only with your consent. You also have the option to opt-out of these cookies. But opting out of some of these cookies may have an effect on your browsing experience.
Necessary Always Enabled
Necessary cookies are absolutely essential for the website to function properly. This category only includes cookies that ensures basic functionalities and security features of the website. These cookies do not store any personal information.
Non-necessary
Any cookies that may not be particularly necessary for the website to function and is used specifically to collect user personal data via analytics, ads, other embedded contents are termed as non-necessary cookies. It is mandatory to procure user consent prior to running these cookies on your website.
SAVE & ACCEPT